Remontowa Shipbuilding has launched the fourth tug in the series, named “Semko”. It is one of the support vessels that has been recently acquired by the Polish Navy. The tugboat in question is going to become a part of the 8th Coastal Defence Flotilla. This is one of the reasons why Marzena Gańcza became the christener of the launched vessel. She is the principal at the Eugeniusz Kwiatkowski Maritime School Complex in Świnoujście. According to Vice-admiral Jarosław Ziemiański, Polish Navy Inspector, the school in question “has been cultivating the Polish maritime heritage since 6 decades now. That very school is a place where the students meet the history, tradition and contemporary view of the sea”.

The ceremony started from an oral report submitted to the Remontowa Shipbuilding President of the Management Board, Marcin Ryngwelski, designating the vessel to be ready for launch. The report was provided by Rafał Dobrowolski, building the H-12 “Semko” (Project number B860). Then the President received a certificate confirming the readiness of the vessel to be launched from reserve captain Janusz Dilling, director of the Supervisory Division supervising the tug series build process of the Polish Register of Shipping classification society (that also supervised the work on the Kormoran II MCMV and “Ślązak” OPV).

The certificate has been issued by the Register on the basis of the Shipbuilding Classification Regulations, Warship Building Classification Regulations, provisions of the Warship Safety Code (Annex 77), a detailed description of the “Holownik” project subject and procedural framework and rules of supervisory activities of the Polish Register of Shipping.

Ryngwelski recalled the fact that Remontowa Shipbuilding is currently building 8 warships for the Polish Navy. Apart from six tugs, the shipyard is also working on the Kormoran II programme. The aforesaid project has already resulted in handing off of the first Polish ORP “Kormoran II” MCMV, with the second one having been launched (ORP “Albatros”) in October 2019. Soon the third vessel of the class (ORP “Mewa”) would also be launched - in July 2020. The Kormoran II programme is to be finalized in 2021.

We are meeting here, at the tenth ship launch event this year and one thousand twenty fifth ship launch event in our history. More than 1005 vessels were turnkey projects for shipowners from all around the world. Our Shipyard would be celebrating its 75th anniversary next year. Over 75 years of our activities we had a chance to work with numerous vessel operators. All of them remain very important to us and we always go to great length to meet their expectations as good as we can. However, domestic customers, especially the Polish Navy, play a very important role for us. It is a source of pride for us, as we have been participating in modernization of the Polish Navy since a few years now. Currently, 8 warships are being build. 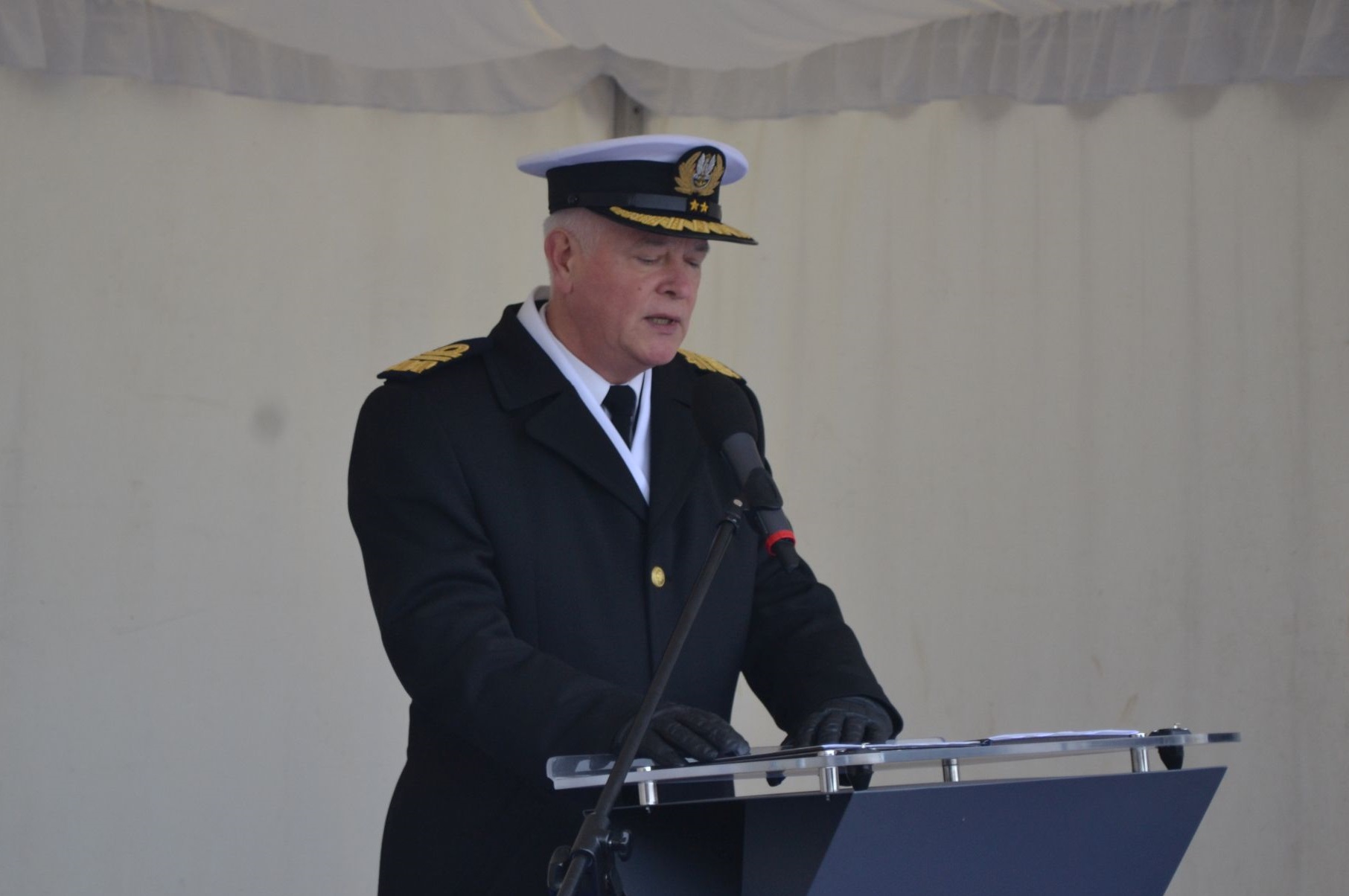 Vice-Admiral Jarosław Ziemiański, Polish Navy Inspector, also thanked the shipyard for timely delivery of the tugs. He said that completion of work with regards to six tugs will “significantly increase the capability to secure a broad range of operations, for own and allied forces”. According to Ziemiański “the Navy would obtain modern vessels that could be used for combat recovery and providing logistical support in the harbours and at sea”. He also stressed the fact that the “Holownik” programme allows the Navy to obtain an entirely new generation of support vessels.

Modern technical solutions within the scope of propulsion, tugging system, recovery operations, rescue operations support, neutralization of pollution or picking up hazardous materials from the water, altogether applied in the current generation of tugs, allow us to speak of a new generation support vessels for the Polish Navy and so called technological leap.

What Vessel has been Launched in Gdansk?

Launch ceremony pertaining to the “Semko” tug is a result of agreement worth 283.5 million zlotys signed on 19th June 2017, by and between the Armament Inspectorate of the MoD and the Remontowa Shipbuilding company based in Gdansk. The contract envisages building six vessels as such two of which would be transferred to the Navy by the end of 2019 („Bolko”/H-11 and „Gniewko”/H-1). Another 4 vessels are scheduled to be handed off in 2020 („Mieszko”/H-2, „Semko”/H-12, „Leszko”/H-3 and „Przemko”/H-13).

The vessels in question have been designed by the NED Project design bureau based in Gdansk (Chief designer: Andrzej Lerch). Meanwhile, the work documentation has been created by the Remontowa Marine Design & Consulting bureau belonging to the Remontowa Holding capital group.

This task has been challenging as the Navy did not want to acquire conventional tugs. The Polish Navy rather expressed a requirement to procure warships that would remain ready to accomplish a broad range of missions. This is reflected in the name of the programme: “Technical support and rescue operations at sea, known as “HOLOWNIK” [TUG]” The vessels manufactured at Remontowa Shipbuilding are to remain capable of providing the following:

One extra challenge here stems from the fact that the Polish shipyards have not built tugs for the Navy since 26 years now. Last hand off ceremony on the H-10 tug took place in June 1993. Thus the products manufactured at Remontowa Shipbuilding are a novelty in the Polish Navy. Not only multi-purpose vessels are being build, but also vessels with unlimited seakeeping ability, capable of operating in any weather conditions and compliant with L1 ice class.