Cpt. Michał Dejer of the 12th UAV Base, WB Group’s Remigiusz Wilk, IAI’s Eyal Engel, PGZ S.A.’s Józef Brzezina, and a representative of Thales Polska presented their views on the matter during the first portion of the panel. The other part of the panel offered the concluding notes. It involved Col. Krzysztof Kurpiewski (Head of the Aviation Technology Division of the Armament Inspectorate of the Polish Ministry of Defence), and Adam Bartosiewicz, Vice-President of the Management Board at the WB Group. The debate was moderated by Paweł Makowiec, PhD (University of Land Forces).

The most interesting data presented referred to the current quantity of UAVs operated by the military, along with the list of units using them. In total, the Polish Armed Forces operate 15 Orbiter mini UAVs, 16 FlyEye mini UAVs, and 2 Scan Eagle short-range UAVs. The Air Force operates 15 Orbiter mini UAVs, based at the Unmanned Aerial Vehicles Base in Mirosławiec. The Land Forces operate five FlyEye mini-UAVs, distributed across the individual units. The 11th Air Cavalry Division based in Żagań, and the 12th Mechanized Division based in Szczecin operate two systems as such each. The 16th Mechanized Division based in Olsztyn has a single system of the type at its disposal. The Polish SOF component has a relatively high number of UAVs placed in its inventory though. The SOF operate 11 FlyEye UAVs and 2 Scan Eagle/BlackJack tactical short-range UAV systems. All of the Scan Eagle UAVs, along with three Fly Eye systems, are operated by the Nil unit based in Kraków. The remaining FlyEye UAVs are distributed among the Lubliniec Commando unit (three systems), Agat unit based in Gliwice (three), and the Formoza unit, based in Gdynia (two systems).

Data on the UAVs operated by the Polish Armed Forces, as well as the acquisition plans, has been presented in the images below. 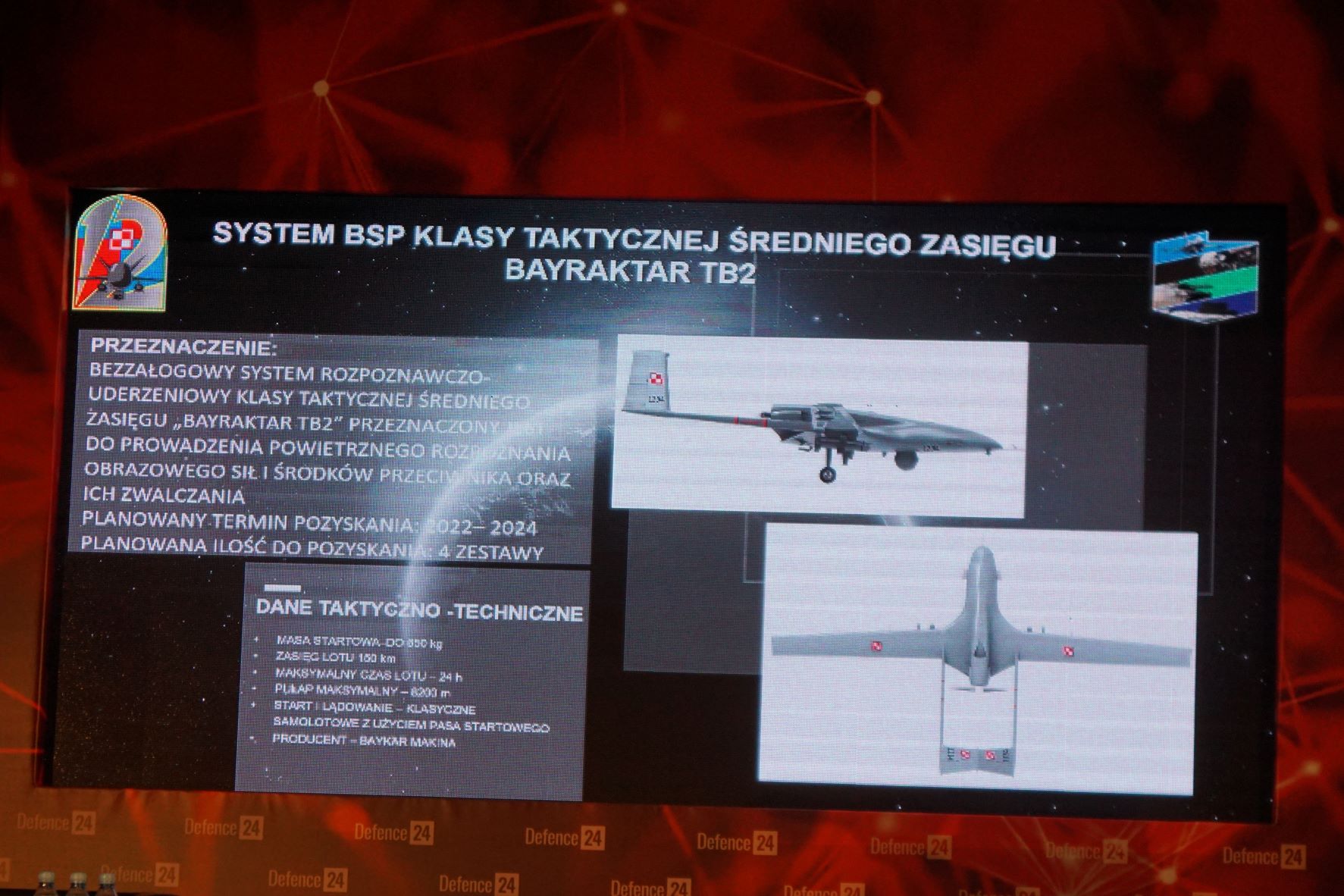 Orbiter 2B v. 2014, FlyEye and Scan Eagle are already well known - their service in the Polish military has been thoroughly described. The UAVs that have not yet been delivered, and even made a subject of any contract are far more interesting. The mini-UAV is to be used to provide close support and secure operations at the level of the Army battalion. It is planned that 25 UAVs are to be acquired, between 2023 and 2025. Short-range tactical UAVs are also to be used at a higher level of land forces brigade. The plan is to procure 8 systems as such, between 2022 and 2024. Tactical medium-range UAVs would be used to gather IMINT and ELINT at the division level. The procurement of these has been scheduled to happen as late as 2026 and 2035. However, the quantity - 13 "sets" - is to be relatively high. The operational level needs MALE UAVs. These systems gather IMINT and ELINT, but at a greater range. To make these systems economically viable, they need to be able to operate over extended periods. Four systems as such are to be commissioned between 2028 and 2034.

Recently, a contract was signed between Turkey and Poland, covering the acquisition of 4 tactical medium range UAVs (Bayraktar TB2). These are to be commissioned between 2022 and 2024. Depending on the equipment carried, they would be able to conduct passive reconnaissance or active strike sorties. Doubts regarding the assignment of those UAVs to the specific units have been clarified during the panel. They would be operated by the 12th UAV Base in Mirosławiec, to the benefit of the whole of the Polish Armed Forces.

Mini and tactical UAVs would be interesting and useful assets - as they would be integrated with the tube/rocket artillery fire control systems. A system as such is necessary at the level of artillery squadron of a brigade, and artillery squadron that is a part of an artillery regiment. The quantitative requirements are high here, as there are numerous artillery units in the Polish Armed Forces. 34 systems as such are planned to be procured between 2023 and 2031.

These are just plans. Whether, and to what extent they would be pursued, remains to be seen. One needs to emphasize the fact that systems as such are a part of the portfolio of domestic UAV manufacturers already (the WB Group), while others (the PGZ Group) pursue different projects within that scope. The WB Group markets its W2MPIR (Multi-Layered Multi-role Mission Air Smart Swarm) suite in a convincing manner. The assumption for this suite is to use the FT-5 and FlyEye UAVs together with the Warmate, and Warmate-2 loitering munitions. The WB Group postulates that IMINT assets inventory should be extended, with extra types of sensors. The EM emissions of all military assets is a major source of information. When different intel is fused, as it is provided by numerous aerial assets, along with loitering munitions, then a kind of swarm is formed. The Warmate systems offered can carry a 1.4 kg warhead, 80% of the weight is formed by the explosive. The firepower offered is comparable to a Spike ATGM. Furthermore, a single Warmate UAV has a price similar to a single ATGM. Whereas the Warmate is advantageous here, as it may remain in the air with a predefined objective, and wait for further orders. When other UAVs detect valuable targets, the Warmates would strike. Due to the simplicity of use, the decision to employ Warmate UAVs may be made at a low level. One could imagine that even a platoon, company, or battalion unit could decide on the employment of this system.

The tests of the FT5 UAVs carried out by the WB Group, with the UAV expected to carry a SIGINT system at an altitude of 1 or 2 kilometres have proven that radars can be detected within a radius of 300 kilometres. Simultaneous employment of several UAVs as such, that could detect and point active radars, would make it possible to precisely define their location. A real-time data feed would make it possible to precisely monitor the radars' period of activity or potential movement/position change. W2MPIR's capacity may be further extended by creating aerial communications/datalink relays. Some of the UAVs could carry such systems. In practical terms, this would provide a capability boost for the military that would not need to use and deploy a radio relay network.

Summing up, it would be ideal to possess a high quantity of UAVs of different roles (specialized/universal role - with payload change possibility in the latter case). Sending assets as such into the battle would provide the Polish military with relevant reconnaissance support (different modes of operation), as well as a boost of strike and C2 capabilities. A multi-role swarm as such has yet another, beneficial advantage. The enemy may remain unable to define the role of the specific assets, and this means that the potential adversary would need to try and destroy all of the UAVs. In the case of swarms big enough, it would be a major challenge to neutralize the biggest threats first. This is why the price of a single UAV belonging to such a swarm needs to be kept low. Marketing-wise, the "Swarm" term is accurate. A swarm of small insects can effectively deter even a big animal.

Poland still needs major quantities of UAVs. Thus, the foreign market leaders still remember to address the needs of the Polish market. The presentations of IAI and Thales have yet again proven the significance of the R&D, design, and manufacturing potential of those entities. It should be enough to say that IAI is delivering its unmanned platforms to 50 countries and that they have already accumulated more than 2 million flight hours. IAI is offering a broad spectrum of UAV systems across all classes - mall tactical, tactical, MALE, and VTOL. IAS ThunderB-VTOL is a good example of the latter class of systems, that can be operated without a runway. It offers flight endurance of more than 10 hours and an operational range of 150 kilometres. Heron Mk 2 is another of IAI's flagship products. It is a huge, multi-role aircraft with a range of 250 kilometres that can be further extended, with the use of SATCOM assets - beyond 1,500 kilometres. The range goes hand-in-hand with flight endurance. The UAV in question may stay airborne for even 45 hours. This is an impressive, and necessary feat - as the UAV may orbit the region of operations, and the user does not lose too much time that would be needed for reaching the theatre. The operators on missions so long need to work in shifts. The speaker representing IAI is a current member of IDF - during his service he was tasked with commending the UAV systems, in a system of shifts. A tactical variant of Heron also exists. Due to the field of its application, its endurance is shorter - 24 hours. IAI emphasized the fact that it is the manufacturer of the system viewed as a comprehensive package. The system is also delivered as a package - training and maintenance services are included as well. All of the IAI UAVs are manufactured at the IAI's facilities.

Thales is offering its flagship product to Poland: the Watchkeeper X UAV. WatchkeeperX features the FLIR 380HDc optronic sensor, alongside the I-MASTER multi-purpose radar. The data is transmitted over a dual, secure data link. The expansive set of reconnaissance assets makes it possible to conduct a myriad of missions. The UAV can also be used as a border patrol asset. The platform offers endurance of up to 16 hours. The whole system can be transported in 3 containers (on trucks), and a single all-terrain vehicle. It is formed by two UAVs carried in a single container. The remaining containers accommodate the ground control station and the logistics support chain, along with the equipment used for auto diagnostics.

The system can be deployed rapidly. Once the containers are available, it takes just 2 hours to prepare the WatchkeeperX for taking off. Notably, WatchkeeperX is the first UAV that has been approved for open airspace operations by the British MoD. Thales is eager to enter the Polish market and begin industrial/R&D cooperation locally.

One should hope that Poland would quickly conclude the tendering processes, to the benefit of the domestic industry and the Polish Armed Forces. The selection of what can be manufactured locally, and what should be imported (the assets that would take longer to develop, at a high cost, thus being unaffordable) needs to be thoroughly thought over.